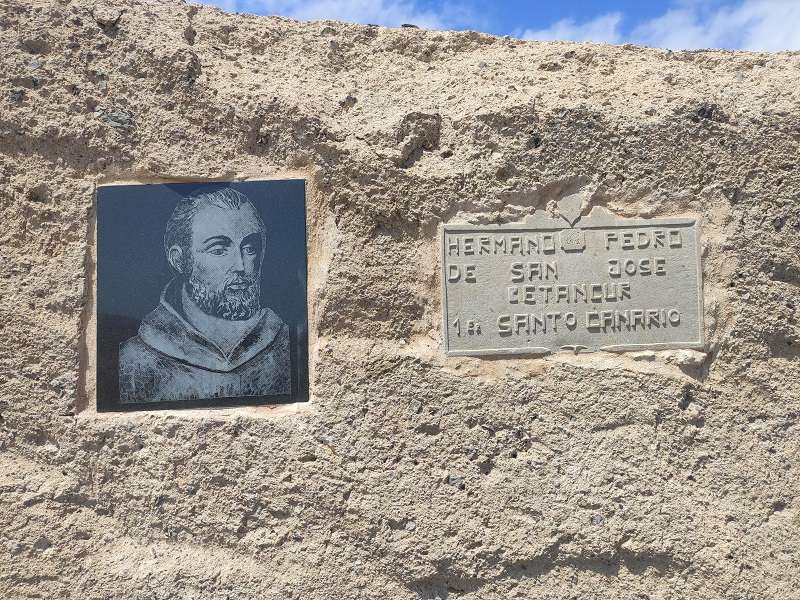 The Cueva del Santo Hermano Pedro is considered an Asset of Cultural Interest (BIC) in the category of Historical Site. A religious space that you can reach from El Médano on a beautiful hiking route through the Barraco de los Valos.

We show you the route, enter the cave of Brother Pedro and discover the history of the first Canarian saint.

We start from the end of the promenade, right at the beginning of the kitesurfing beach.

Instead of following the shore, turn right, passing in front of the kitesurf school Surf Center Playa Sur.

In the background you will see a bridge under the road. You will have to pass under the bridge to start the path.

Now just follow the path, enjoy the scenery of the Barranco de los Valos and take the turning to the left.

At some point you will come across the sign that tells you that you have reached the cave.

How to get there – Route map

The Cave of the Holy Brother Peter from the inside

When you enter the enclosure you will find the Cave of St. Brother Peter, a religious space in honor of Brother Peter, beatified by Pope John Paul II in 1980.

Since 1999, the Cueva del Santo Hermano Pedro and its surroundings have been considered an Asset of Cultural Interest (BIC) in the category of Historic Site, a title of protection granted by the Government of the Canary Islands.

Celebrations in the Cave of Brother Peter

This was the life of Saint Brother Peter

Brother Pedro was born in Vilaflor on 19 March 1926. His parents were Amador González and Ana García. He had 4 other siblings.

It was a very religious family, which Peter learned very early not only prayer, but also penance and fasting.

At the age of 11 he offered to work as a shepherd to pay off a family debt. For 12 years he took care of the herds of goats, which during the winter, he would take down to the land closer to the coast in search of a more favourable climate. He used to shelter in what today is called La Cueva del Hermano Pedro (Brother Pedro’s Cave), near which there is a water well, with which he watered his goats.

At the age of 23, his dream of becoming a missionary made him leave for America. He arrived in Cuba, worked as a weaver until he had the opportunity to embark for Honduras and from there, walking, he arrived in Guatemala where he would remain all his life.

Arriving tired and sick, hungry and thirsty, he had to be admitted to the hospital. When he left, he had to look for a living working again as a weaver in Pedro Armengol’s house. Following the advice of some friends, he began to study to become a priest. But it cost him so much effort and his performance was so poor that he had to give it up. His future was on another path.

At the age of 29, he received the Franciscan tertiary habit. He worked on the construction of the church of El Calvario, which became his favorite place of encounter with God and spiritual peace.

In his free time he went out to walk the streets of the city, visiting the sick, caring for the needy and getting in touch with the problems of the people. He noticed that there were many abandoned children and decided to help them. One day he had the opportunity to buy a small house that had belonged to Maria Esquivel, an old woman whom he often visited and whom he accompanied at the time of her death. With the help of some benefactors, in which a teacher, paid by him, taught the children.

We can truly say that Brother Pedro was the precursor and founder of the first school in America as well as of social assistance among the population of Guatemala.

Although there were four hospitals in Guatemala at the time, they were totally insufficient. And the sick, without being yet reestablished, had to leave their beds and leave being very frequent relapses even deaths for this reason.

Pedro, who had known this reality in his own flesh, thought that it was necessary to build a hospital for these convalescents. He asked permission from the King of Spain and began his work, to which he would dedicate his whole life. He named it the Hospital of Bethlehem, in honour of the birth of Jesus, for whom he felt a great devotion. It was the first hospital for convalescents in the world.

Seeing the beautiful work that Brother Pedro was doing with the sick convalescents, a group of Brothers of the Franciscan Third Order gathered around him and offered to collaborate with him. Thus was born the Bethlehemite Order, of which he was the founder. At the beginning it was a community of men, but years later a branch for women was also formed and spread throughout many countries of Latin America.

It was Brother Pedro’s custom to walk the streets of the city at night, visiting the sick or sometimes carrying a cross on his shoulders. Driven by his eagerness that all men should be saved, he used to proclaim, accompanied by the ringing of a little bell, couplets such as the well-known one:

“Remember, brethren, that we have one soul

And if we lose it, we shall not regain it.”

He was a man who admirably knew how to unite an intense life of prayer with an extreme concern for the needy. To facilitate the transport of the sick to his hospital, he had the idea of strapping a chair to his back in which he carried the disabled.

Another of his concerns was the women who were engaged in prostitution. He provided them with dignified employment and helped them to get out of the vice. Thursday was the day he was assigned to visit the prisoners in the jail, whom he encouraged with his encouraging words.

After working tirelessly for sixteen years, he fell ill one day with a high fever and a few days later he gave his soul to God. It was April 25, 1667. His last words were: “This is my glory”.

He was so beloved in Guatemala that when he died, people streamed into the room so that they could take a piece of Brother Pedro’s garments. The whole city came to the funeral of their saint.

“He is an exemplary example for today’s Christians, reminding them that to be a saint requires a Christianity that is distinguished above all in prayer. 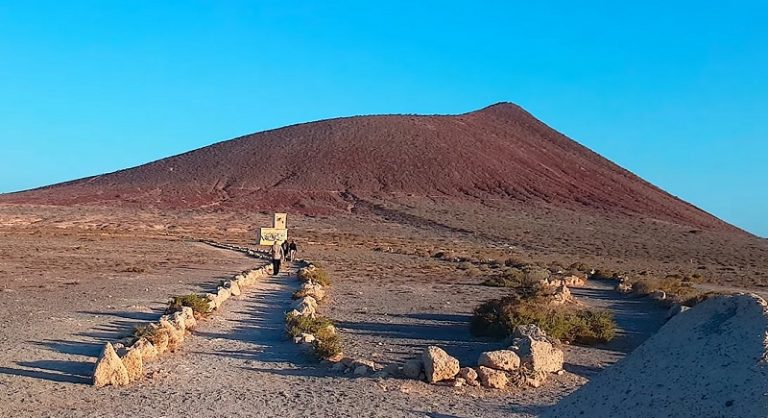 Route of approximately 1.5 hours from the village (return trip).