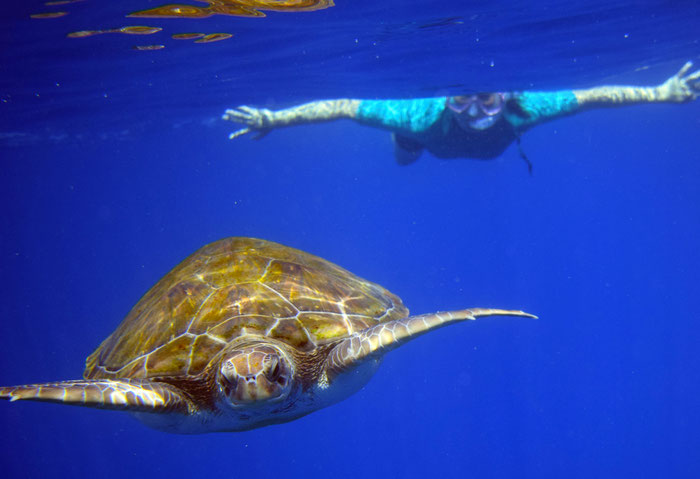 Imagine swimming among turtles and sailing with a kayak surrounded by dolphins. In Tenerife it is possible if you go to the right place.

BOOK YOUR PLACE AND START THE ADVENTURE

You can cancel free of charge up to 24 hours before the activity.

This activity is registered with the local tourism authorities, Registro General Turístico with the following code TA-4-0008255.11 and TA-4-0008255.37

Video of the activity

What is included in the price?

Where to snorkel with turtles and kayak with dolphins?

The ideal place to snorkel with turtles and kayak with dolphins in Tenerife is Palm-Mar, in Arona, Tenerife South.

Once there, the Arenita Beach is the place where the water excursion begins.

What species of turtles can you see in Tenerife?

Discover curiosities and interesting facts about these two species:

What species of dolphins can you see in Tenerife?

We can find up to 21 species of cetaceans, including dolphins and whales. If we stay with dolphins, there is a species that resides all year round in Tenerife: the bottlenose dolphin (Tursiops truncatus).

Discover curiosities and interesting facts about this species:

Tips for kayaking with dolphins

On this excursion you will enjoy the sensation of being surrounded by pods of dolphins jumping in the air or swimming under the kayak, but don’t worry! They are used to humans and get along well with them, as long as you respect them. Let them flow peacefully, don’t try to touch them and don’t feed them either, just enjoy their presence and they will enjoy yours.

Here are some tips for kayaking with dolphins in Tenerife.

You should sit with your back against the seat and place your heels in the foot guides. The tips of your feet should point outwards and your heels towards the centre of the kayak. As for your knees, they should be slightly bent upwards.

The best thing to do is to save your strength and not burn yourself out at the beginning with strong paddling, starting with a gentle rhythm so that your muscles can gradually adapt to the exercise. After a while you can pick up some more pace, but remember that the goal is to see dolphins and for that it is good to go slowly and enjoy the experience.

3. Do not move away from the group

For everything to go smoothly you must obey the instructions of the professional guide, who knows where the turtles and dolphins are, and who is also responsible for our safety and who knows the sea best. If you move away from the group you run the risk of not following the guide’s instructions and entering an area of currents or a place where you should not go.

4. Move in the direction of the kayak, not in the opposite direction.

Kayaks are very stable when you are on the road, but when you try to make sudden movements in the opposite direction, they can become unstable. To turn with the kayak, you just need to follow the movement and direction with your body and use the kinetic energy of the kayak to your advantage.

Tips for snorkeling with turtles

Sea turtles are species of special protection and are included in the Canary Islands Catalogue of Protected Species (LAW 4/2010, 4th June). That is, they must be respected in the same way as dolphins, without touching or feeding them, just enjoying their presence in the freedom of their habitat.

Here are some tips for snorkeling with turtles in Tenerife:

The first and most important rule while snorkeling is not to touch anything, both for your safety and to avoid altering the ecosystem of the marine species that live there (such as turtles).

2. Do not separate yourself from the group

The tour guide will be with you at all times while you enjoy snorkeling with turtles in Tenerife. Stay with the group enjoying the experience and don’t wander away so you don’t risk getting caught in the current.

During the snorkel you will see, besides turtles, other marine animals such as rays and fish. If you feed them you can seriously alter the natural ecosystem of the area. Giving food to marine animals is also called feeding and is a bad practice that we fight against.

You can enjoy the underwater world much more if you take your time, go slowly and don’t get tired. Patience is one of the most important qualities you need during snorkeling, take your time to explore and search. If you rush, you will surely scare away the very wildlife you are looking for.